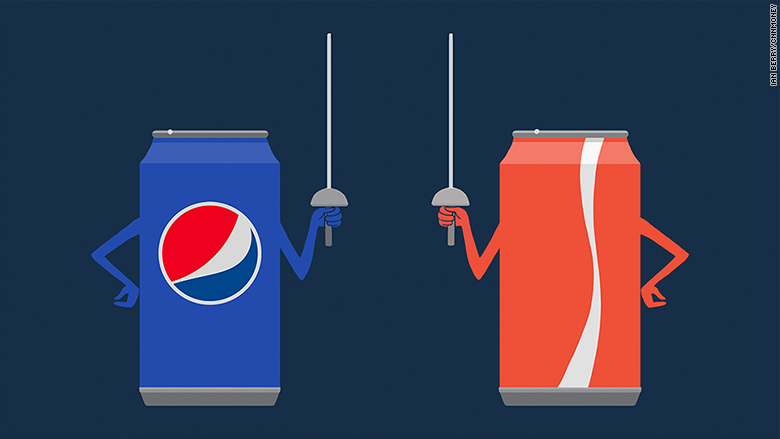 Coca-Cola and Pepsi are two names that are well-known for being the forerunners of a hundred billion dollar soft-drink industry; from the heart of America to the most remote locations, Coca-Cola and Pepsi have successfully stretched their influence over the entire world. Yet, this success is owed not to chance, but by carefully-crafted marketing strategies and plans that not only were meant to capture consumer interests but also a strong sense of consumer loyalty.These two iconic brands have historically been perceived along-side one another,known for being synonymous with American culture,and the major belligerents of the never-ending ‘Cola Wars’.

Born at a time when dubious miracle potions and tonics were in full swing, Coca-Cola was an offshoot of such a medical business, sought to be transformed from a concoction of wine and coca leaves extract to a soft drink, whose ingredients also included extracts from the kola nut. As an attempt to make this sell,new leaders of this brand sought to refine the taste, adding more sugar and tweaking the original recipe.

In 1905,Coca-Cola finally gained its presence in American society when it decided to remove all perceptions of the drinks’ medicinal value,and just advertised it as a cooling refreshment, a value that stuck and boomed,as prohibition after the First World War was enforced.

Unable to keep up with Coca-Cola, ‘Pepsico’ almost sold itself over to the former, whose refusal came to be known as one of the greatest blunders in marketing history. As Pepsi was the single biggest competitor, Coca Cola’s failure to see the long-term gains of burying Pepsi became the biggest thorn in their foot,and Pepsi’s ascent as a global conglomerate in its own right had begun. Pepsi took on Coca-Cola in terms of its economic position, offering 12 ounces for a nickel, while every other soft drink was 6 ounces a nickel. Though Pepsi never grew into the giant Coca-Cola became, it managed to set its foundation in society, giving to the market what it so lacks, i.e., value for money during an economically-unstable time.

With the onset of the Second World War,sugar rationing (that in the First World War nearly destroyed Pepsi) posed a direct threat on domestic sales of Coca-Cola by half.Coca-Cola used this opportunity to present to the President of the USA,and consequently the people;that Coca-Cola was a wartime necessity.Millions of cases were supplied to military training camps and Coca-Cola did not only catch the public eye in a new light,such as the ‘taste of home’,but also delivered a devastating blow to Pepsi,(who was not exempt from sugar rationing),in what came to be known as the greatest marketing stunt in history.

Pepsi became the least of Coca-Cola’s concerns to the extent that Pepsi got renamed the ‘Imitator’.However, with the coming of new media, Pepsi put its resources to full use. As Coca- Cola targeted the cola fanatic, war-time generation, Pepsi decided to target their children, the next generation. Pepsi through its advertisements drew attention away from the product, and toward the consumers of the product instead. This way,Pepsi became more consumer-oriented as opposed to Coca-Cola, and also sought to willingly show variety to its consumers, upgrading the bottle sizes, flavours and so on, reflecting its ability to cope with the changing needs of consumers while also providing its consumers with characteristics lacking in other soft drinks.

Through the ‘Pepsi-Challenge’,a massive ad-campaign, where customers at malls were required to taste test both soft drinks without knowledge of which is which,resulting in most – if not all – customers to unknowingly choose Pepsi. Pepsi’s market share continued to climb, and was almost equal to that of Coca-Cola. Being wary of Pepsico’s growth in the market, Coca-Cola finally decided to enhance its product in order to remain relevant in accordance with a generational shift and changing tastes. Ironically, to improve the taste of it, Coca-Cola decided to make its soft drink less acidic,sweeter, and in short,just like the ‘Imitator’, Pepsi. The new Coca-Cola was received with harsh criticism to the masses over the span of three months; many of whom felt that the drink failed to continue to stand for their American culture or the ‘taste of home’;and was welcomed with open arms by Pepsi who had a field day with Coca-Cola’s attempt to imitate the ‘Imitator’.

To conclude, Coca-Cola and Pepsico have captured the public imagination and managed to gain power in almost every region on earth today.Their influence even stretches over other parts of consumers’ lives,such as Coca-Cola extending its business outside its core focus, as with Columbia Pictures, and Pepsico extending its business to include Taco Bell, Pizza Hut and KFC, brands that are very well-known throughout the globe and our part of daily discourse. Through their huge marketing strategies, plans, blunders and tactics, both brands managed to create a powerful name for themselves, and the power struggle that’s typical of the Cola Wars is witnessed even today.